Last night the twins got excited about playing some games. We started with Greedy, Greedy Goblins, which they got for their birthday. If you haven’t played, it’s a real time game in which you “mine” tiles from the center of the table and play them face-down in one of the mines encircling the tile pile. Only you know what you’ve placed, but anyone can claim any of the mines. So you might stash treasure in a mine only to have another player steal it from under your nose.

The trick is that you can also stash negative tiles like monsters in a mine. So you might lure another player to claim a worthless mine. And then there’s dynamite. One stick doubles treasures. Two sticks triple treasures. Three or more sticks? Well that’s too many. You’ve exploded the mine which wipes out any treasure and costs 5 coins.

I usually dislike competitive real-time games, but being the fastest doesn’t ensure a win. In fact, taking your time makes it easier to remember what you’ve stashed in what mine. Gotta be greedy, but not too greedy to win.

My kids have really enjoyed Catan Junior, which I find more interesting than the original game. But I got a copy of Catan for Christmas and my son begged to play it. We got it set up and played about half the game. Unfortunately, this game demonstrated the two of it’s flaws:

These problems are amplified by tired children. So we called the game on account of bedtime.

With the house to myself, I played my first game of Orchard: 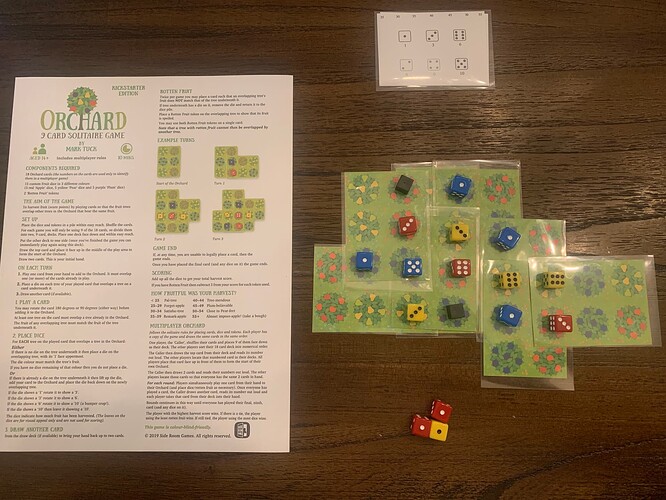 38 points is, according to the rules, “Remark-apple”. It’s a fun little puzzle.

I also wrote a review of Battle Card: Market Garden, which is an abstract model of the WWII battle to capture a crossing of the Rhine after D-Day.