I saw this chart from The Wealth of Generations: Latest Update: 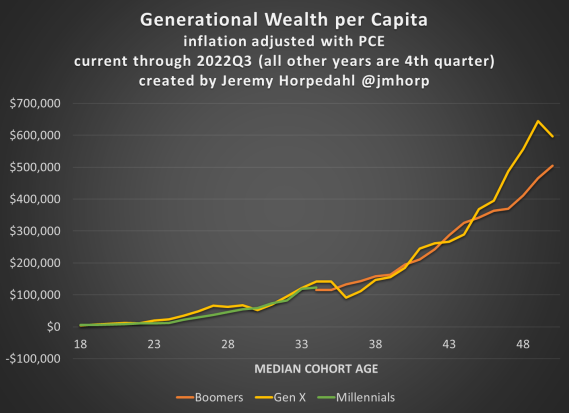 It’s important to note that the numbers are inflation adjusted. Even though, say, gas costs a lot more in nominal dollars now compared to previous years, the dollars on this chart buy roughly equivalent amounts of things across generations.

Looking back ~20 years when I was about at the same moment in life as the most recent Millennials data point, we were just making ends meet. I had a good job as a programmer at JPL, but my wife was home with our toddler. We rented a little house in Pasadena. We used to laugh at the financial rule of thumb that you ought to spend 30% of your income on housing. Our rent was a lot closer to half.

Still, we gave 10% of our income away and I’ve always contributed at least enough to my 401(k) to get the company match. That’s typically 4-5% of my paycheck depending on the company. We ate nearly all of our meals at home and shopped in bulk at Costco. Our cars were paid off. So in all we were doing alright.

A few years later, my wife got back into the job market with a non-profit and I got steady raises. A few years after that my parents loaned us part of the down payment on a condo in Burbank. My wife went back to school to get her RN. I switched to working from home after our twins were born. Mortgage payments were still a huge percentage of our income.

Just before the pandemic started, we bought a single-family house in Burbank. Our condo had increased in value and we’d paid off enough of the mortgage to have the down payment plus a little extra for moving expenses. We were helped by getting a great interest rate (which we refinanced again when rates dropped more) and increases in salary for both my wife and I.

All along we saved to our retirement accounts and invested in low cost stock funds. Thanks to the power of dollar-cost averaging, compound interest and tax-deferred growth, we have saved up some money for retirement. And to be fair, I was born into a privileged position.

Housing costs are a huge barrier when people start their careers. This isn’t something new. Obviously the chart represents an average and some people are a lot better off while others are in worse shape. Getting financial help from the previous generation (as we did) can make a difference when it comes to large investments such as buying a house. But overall, it seems like the next generation isn’t in a worse place than my or my parents’ generation.